Blog
Nevis Disaster Management Department (NDMD) / News / EUREC4A: What, Why, When, Where and How?
Feb 03 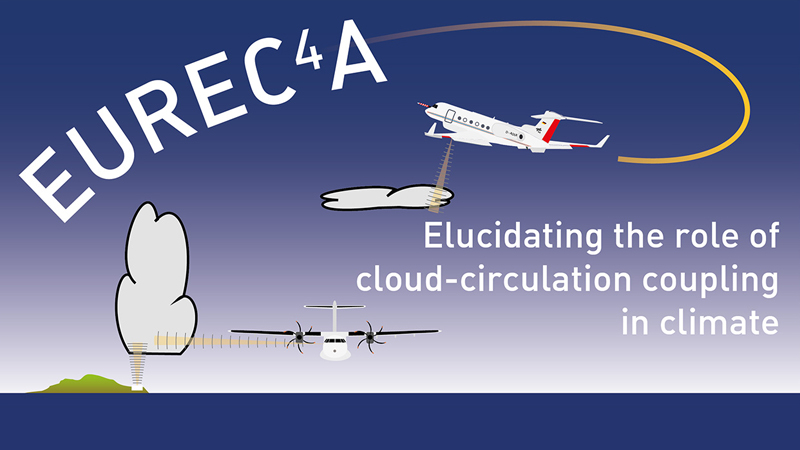 EUREC4A: What, Why, When, Where and How?

January 28, 2019 (Bridgetown, Barbados) – The first major planning and coordination meeting for the field campaign EUREC4A (Elucidating the Role of Clouds-Circulation Coupling in Climate) will be held at the Caribbean Institute for Meteorology and Hydrology (CIMH), Husbands, St. James, Barbados from 18-19 (TBC) February 2019. EUREC4A is a capstone field experiment of the World Climate Research Programme (WCRP) designed to significantly enhance scientific understanding of the role of Tradewind cumuli, which represent the most frequent cloud occurrence on Earth and commonly seen in the Caribbean, in controlling the magnitude and pace of future global warming. Data collected over the ocean east of Barbados during the field campaign will form the basis for significant improvements to our understanding of tropical meteorology. This understanding is expected to drive significant enhancements to the predictive capability of existing regional and global weather and climate models. Outputs from the field campaign and the models it helps inform will be important for disaster risk reduction and sector planning activities, both globally and especially across the Caribbean. Results from EUREC4A will inform investments for sustainable development and enhance long term climate resilience activities in key socio-economic sectors.

The EUREC4A field campaign will occur one year from now, between 20 January – 20 February 2020, and will bring together teams from German, French and Caribbean institutions (as well as US and other European participants) to collect ocean and atmospheric data east of Barbados using a multitude of research aircraft, ship and ground-based platforms. EUREC4A is motivated by the previously successful campaigns – Next-generation Aircraft Remote Sensing for VALidation studies (NARVAL)-1 and NARVAL-2 conducted by German and Caribbean institutions in January 2013 and August 2016 respectively
and the international prominence of the Barbados Cloud Observatory, which has collected an extensive set of daily atmospheric measurements across multiple instrument platforms since its establishment in 2009 at Deebles Point located along the east coast of Barbados.

The EUREC4A field campaign will include the deployment of at least two research aircraft [the German High Altitude and LOng Range Research Aircraft (HALO), a Gulfstream G550, and the ATR42 from the French Facility for Airborne Research (SAFIRE)), two to four research ships, advanced ground based remote sensing, a new generation of sophisticated satellite remote sensing and state-of-the-art turbulence-resolving computer modelling (with a resolution of a 100 m applied over thousands of km). The participation of additional aircraft and ships from the US and the UK is under discussion. The EUREC4A is designed to further benefit from data collected from ADM-Aeolus, one of the flagship satellite platforms of the European Space Agency Living Planet Programme. EUREC4A is also inspiring additional field experiments and partnerships that will be confirmed in the near future. These additional partnerships will bring additional state-of-the-art instrument platforms that will further enhance data collection.

Dr. Bjorn Stevens, Director of the Max Planck Institute for Meteorology, a world renowned institute in Hamburg Germany, says: “A year from now the world will be coming together over the seas east of Barbados to tackle some of the most challenging and important problems in climate science.” Dr Stevens, who with Dr Bony conceived of the project and co-leads its European contributions, adds: “the EUREC4A field study, is a joint European (French/German) and Caribbean effort, that culminates two decades of research to better understand how clouds influence the response of the climate to increasing CO2 concentrations, and how clouds influence weather and climate more generally. EUREC4A builds on nearly ten years of joint work with the Caribbean Institute of Meteorology and Hydrology, a cooperation that has laid the ground work for the planned field operations”

Dr Stevens points out that “Findings from EUREC4A are expected to make a central contribution to efforts to anticipate future global warming, and how this warming impacts quantities as diverse as the sea-level rise, changing patterns of precipitation, and the distribution of major wind systems. At the same time EUREC4A is opening new levels of inquiry into how the atmosphere and ocean communicate. Measurements made during the campaign, some of which will be made for the first time ever, will be influential for a new generation of scientists trying to also understand what governs ocean smallscale current systems and their effect on ocean biology and sea-grass, as well as factors influencing major forms of renewable energy, such as wind and solar.

Dr. Bony, one of the scientific Pis of the EUREC4A field campaign, senior scientist of the French National Center for Scientific Research (CNRS) at the Laboratory of Dynamical Meteorology in Paris (France) and laureate of the European Research Council Advanced Grant EUREC4A, noted that “EUREC4A is a field project motivated by 15 years of research on the role of clouds in climate and climate change. Narrowing the uncertainty in global and regional projections of our future climate requires a better understanding of how clouds, and trade-cumuli in particular, will respond to their changing environment, and how this response will affect Earth’s temperature and circulation patterns.

The cutting-edge instrumentation and novel experimental strategies that will be deployed during the EUREC4A field campaign will transform our scientific understanding of the factors that control the cloudiness of the trade-wind regions, their impact on Caribbean meteorology and on global climate. The data collected from the campaign will be used for decades as a benchmark for advancing the development of a new-generation of weather and climate models, and for improving our capability to probe and monitor the atmosphere and Earth’s surface with satellite remote sensing. The field campaign will also be an opportunity to reaffirm and strengthen the synergy and scientific cooperation between France, Germany and the Caribbean.”

Dr. Farrell, the Principal of the Caribbean Institute for Meteorology and Hydrology (CIMH) noted that “CIMH is excited to be a part of the international collaboration bringing the EUREC4A campaign to Barbados. EUREC4A represents one of the most significant ocean and atmospheric experiments conducted in many years with the outcomes of the various studies expected to significantly improve the predictive accuracy of weather and climate models over the tropics, leading to significant improvements in weather and climate early warning systems and considerable strengthening of the region’s resilience to severe weather and climate shocks, resulting in reduced loss of life, property and investment from these events.”

Dr. Farrell further stated that “EUREC4A has the potential to transform ocean and atmospheric research in the region by making available vast amounts of new data and presenting opportunities for new global collaborations and partnerships leading to cutting edge research. Already there is expressed interest among students and early career researchers to participate in the campaign given the opportunities for new and transformative career building research. It is expected that EUREC4A will transform the state of knowledge about the region’s oceans and atmosphere as well as spawn many theses and research publications that will transform Caribbean science and innovation, leading to significant social and economic benefits in the coming years .”