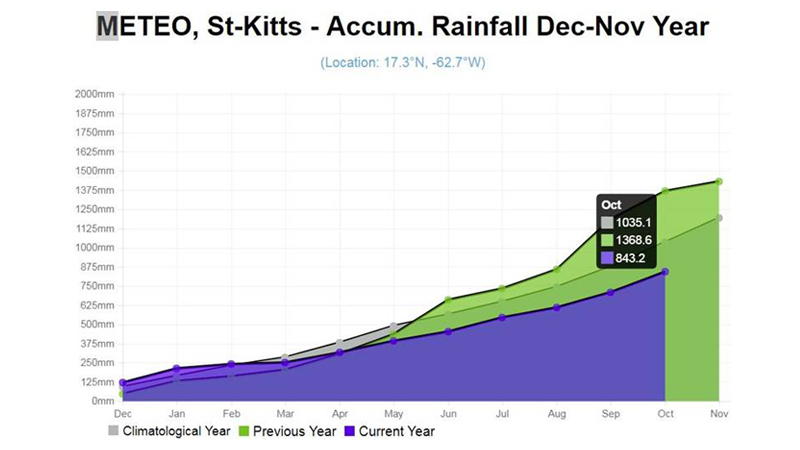 Climate projection for St. Kitts as of 31st October 2018

Analysis of the rainfall data for St. Kitts is showing a deficit in rainfall total compared to last year and our average rainfall accumulations. As of 31st October 2018, the rainfall recorded at the RLB Airport was about 192mm or about 7.5inches less than the average total for that period of time (1st January – 31st October). The difference between last year’s total compared to this year’s total for the comparable period of January 1st – October 31st is even more pronounced with this year’s total being 525mm or 20.7 inches lower than that of last year for the period up to October 31st. This major deficit for 2018 when compared to both 2017 and the average is very worrisome, especially since we are about to transition into the dry season. The early projections are already hinting towards a possibility that some degree of El Nino may develop during the dry season. If this materializes, then the projection for a drier dry season (possibly drought like conditions) could become a reality. This can have serious implications on water availability during the dry season of 2019. We will continue to closely monitor rainfall totals over the upcoming months and we will continue to provide the climate outlooks on a monthly basis and any significant information based on these climate outlooks.