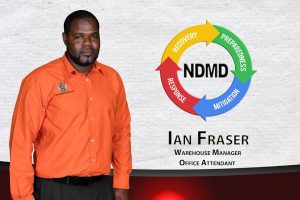 Mr. Ian Fraser started his career as a privately contracted security officer at the offices of Disaster Management (NDMD) at our then down town location.  Shortly thereafter, he joined the dynamic team of the NDMD as an office attendant.  Ian, who is an arduous and committed worker attended many training sessions during his time as an office attendant.  He has successfully completed the USAID/OFDA Hazardous Material (HAZMAT) Course. Ian is the HF/VHF Radio Communications Operator.

Mr. Fraser is experienced in Risk Reduction Management and has intimate knowledge of the NDMD operations.  Having attained training in warehouse management, Ian is presently the Warehouse Manager at the department.  Ian is also the second longest serving member of the Disaster Management team having served over 12years. He has contributed immensely to the success of the other units within the department.